To find out more about government’s response to COVID-19 please visit sacoronavirus.co.za

November is for the Vegans…

November is for the Vegans…

November is recognised as World Vegan month, with a nod to the 1st of November 1944 when the Vegan Society was first established. It was in those early days that the phrases ‘vegan’ and ‘veganism’ were coined. Now, more than 70 years later, the benefits of veganism for humans and the natural environment are widely known and chefs all over the world are preparing creative vegan menus to meet the increasing demand from health-conscious diners. And our Exec Chef, Gary Coetzee, is amongst the best – having been creating exceptional vegan cuisine for many years!

This year, World Vegan Day coincided with the beginning of the 26th UN Climate Change Conference of the Parties (COP26), which brought together countries worldwide to discuss how to tackle the climate crisis. According to the Vegan Society, switching to a plant-based diet can reduce one’s food-related carbon footprint by up to 50%.

At Brookdale Estate, we create experiences and cultivate the land mindfully with a holistic approach. All operations are based on sound environmentally-friendly principles and our GM Yvonne Coetzee, and her team, are currently preparing for certification in the voluntary environmental sustainability scheme, IPW (Integrated Production of Wine).

It’s important to think outside of ourselves and World Vegan Month encourages us to do just this. Whether it’s incorporating a meatless-Monday into your routine, ensuring the products you source are ethical and sustainable, or if you choose the full vegetarian or vegan lifestyle – it’s all about making tomorrow just a little bit better than today. Executive Chef Gary Coetzee says he enjoys creating delicious, plant-based menus that meat-eaters find appetising, satisfying (and even perplexing) too. We’re sharing one of our favourites from Chef Gary’s kitchen this week: 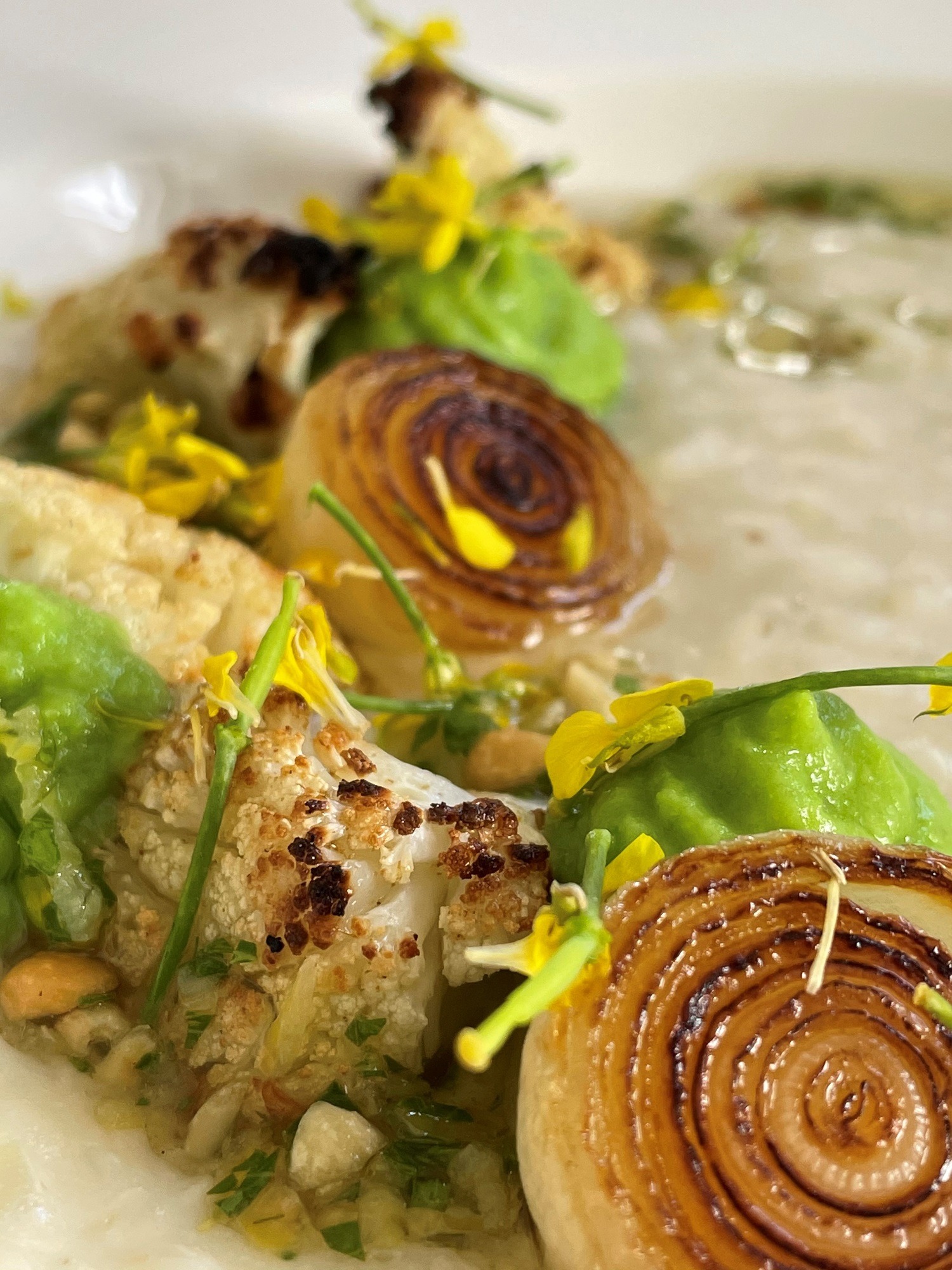 Heat the oil in a saucepan over medium heat. Sauté onions and garlic until translucent.
Add the cauliflower florets. Cover with cold water (1 to 1.5 l) and bring to a simmer.
Add a teaspoon of salt. Cook cauliflower until tender.
Strain the cauliflower and reserve the stock/water for the risotto.
Using a blender, puree the cauliflower adding the Nutritional yeast. This adds a cheesy savouriness to the cauliflower puree.
Pass purée through a sieve and set aside.

Sauté the onion and leeks over medium heat.
Add 2 cups of peas. Add one cup of water.
Bring to the boil and cook until tender.
Strain and reserve the water/stock for the risotto.
purée the pea, pass through a sieve, and set aside. 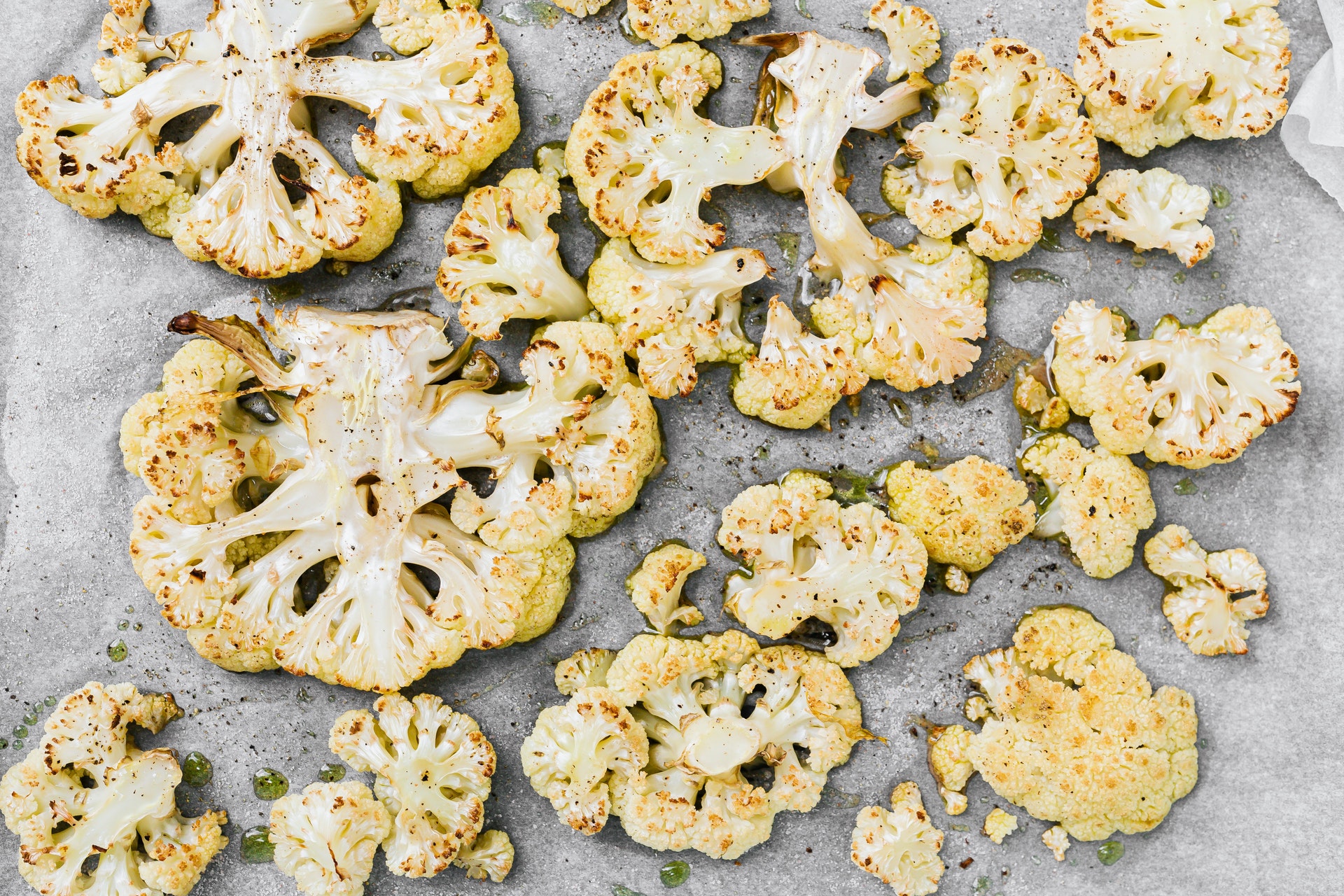 Peal a couple of pearl/baby onions and cut in half along its equator.
In a moderate pan add some neutral oil and sear the onions till caramelised and tender.
Season and set aside.

Heat the oven to 250. Put the cauliflower florets in an ovenproof dish.
Coat with neutral oil. Season with ground cumin and salt.
Roast until slightly charred.

In a saucepan over medium heat add the oil.
Add the rice and gently toast.
Add onions and garlic and cook until till translucent stirring consistently with a rubber spatula.
Add wine and reduce to cook out the wine.
Ladle in the stock – a 125ml ladle at a time stirring the rice consistently.
Repeat the process until the rice is al-dente.
Add a cup of cauliflower puree, this will give the risotto a creamy texture without having to add butter or parmesan.
Add the Nutritional yeast and stir well.
Season to taste. 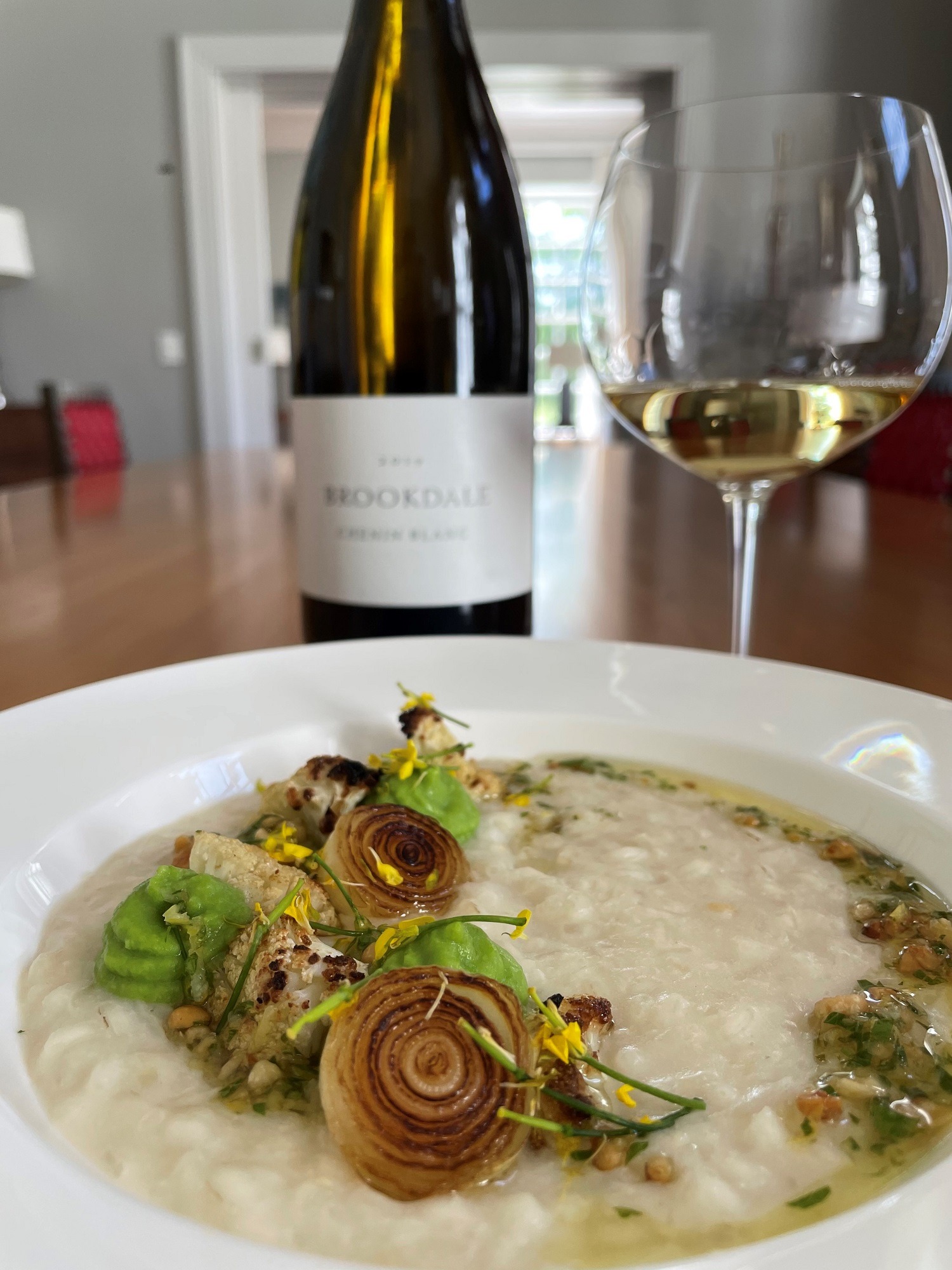 Add a light sprinkle of nutritional yeast to the bottom of a bowl (this ensures the nutty parmesan flavour is present throughout the dish). Add a portion of the risotto on top. Place your florets and charred baby onions on top of the risotto, and then dollop a few teaspoons of each purée around the roasted vegetables. Drizzle some of the avocado or olive oil over the dish, drizzle a light amount of truffle oil, squeeze about a teaspoon of lemon juice over the top and top off with toasted pinenuts. Enjoy!

Submit your question below and we’ll be in touch!

Want to be a Brookdale Stockist?